That thing about birds 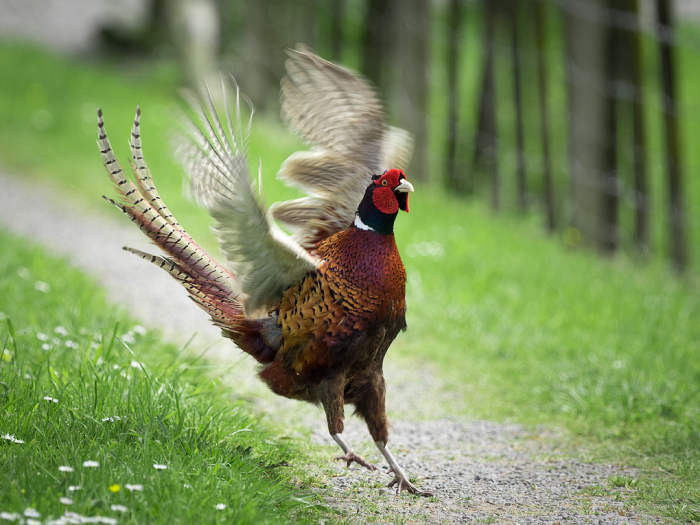 What is it that you love about birds? What’s at the root of the thrill you get when something as apparently ordinary as a sparrow sits on your verandah railing, puffed up against the cold, with a spatter of drizzly raindrops sparkling and gleaming diamond-like on the feathers of its back, and it doesn’t bother to fly off when you walk past the window? Or, when you watch a magpie swoop in fast and streamlined, a white-and-black bullet, low over the paddock then suddenly tilt and arc around and flare its wings and stop in mid-air to lower itself onto the ground, the sheer class and cheek of it a delight you can almost feel physically, as if for a moment you inhabited the bird’s body and felt the rush of air and the forces twisting your wings as you bent the low sky to your will? For a moment, you left your own body and lived in the air with a command and sheer gall you yourself, you slow and awkward lump of mammal fixed to the ground with your fear of falling, never had and never will. No flying bird ever feared falling. How could it? A fish might as well fear water.
Naturally, your pedant’s mind reminds you not all birds fly. But big deal — you love them nevertheless. That pheasant rooster you saw this morning just below the Raumai Hill could have flown if it felt the need, but it didn’t — didn’t fly, didn’t feel the need — and you didn’t love it any the less because it stayed earth-bound, strutting and peering, a little anxious perhaps, but not prepared to waste energy flying. Perhaps it knew you were no threat. Perhaps it sensed you just wanted to admire, on the verge of gasping, anything that could be so spectacular; perhaps it sensed your twinge of envy, your awareness of your own drab and heavy form.
Perhaps you love the insouciance of so many birds, too — the way they just go about their lives not caring about you and your kind even when you might be a danger or a benefit. Those crows among the filth in India, for example — just going about their business, fossicking for the delicious among the unspeakable; they know you’re there, but they ignore you until you’re one step too close, and then they’re gone. A few flaps of those strong, shining wings and they’re above you — you’re beneath them and they’re looking down on you — and when you’re a few steps further on they’re back down to earth, getting on with their day.
You’re a minor nuisance but they’re not bothered. They do what they’re doing. When they’re feeding they’re feeding; when they’re fighting they’re fighting; when they’re mobbing a threat — a cat, an owl, you — they give it all they’ve got. Then they go somewhere else and do something else.
They know how to concentrate, those birds. Watch a heron stalking, or a kingfisher posted on a power line, watching the paddock, or a godwit probing the estuary, and you know you know nothing about focus. You’re a mess of distractions — even when you think you’re writing well, you’re … ooh, hey, look at that rain, how will I get back to the car without getting soaked? … that guy in the brown coat and trendy hair looks familiar, … and so on. Could you focus for an hour on picking worms out of estuarine mud? I bet not.
But here’s your pedant’s mind again, telling you birds aren’t really like that — they can’t be like that, surely? Even when they’re stalking bullies in the shallows, or crabs on the coast, or lizards on the rocks, they’re alert for threats — that cat again, or the owl, or you, or the shadow overhead — and maybe they can use different parts of their bird brains more independently than us. Some, like godwits, can sleep on the wing, switching half the brain off while the other half carries on allowing their wings to carry them on that immense journey from Alaska to New Zealand, eleven thousand kilometres, non-stop.
Try sending half your brain to sleep on your drive home and see how far you get.
You don’t envy birds, though. You love them — among so many other reasons, only a few of which you can identify — because they’re so much more competent than you, yet most of the time they don’t bother rubbing it in the way we would if we were more competent than them. There’s no malice in their superiority — it’s just a fact to them, and they’d probably try to cheer you up if they thought you envied them. You, in turn, only envy them in a good, respectful way, the way you wish you were as wonderful as someone you love.
And maybe that’s exactly why you love birds, but you really don’t know.

Posted by pohanginapete at 8:11 pm

Email ThisBlogThis!Share to TwitterShare to FacebookShare to Pinterest
Labels: Birds, Thinking about stuff

That is the loveliest piece of writing about deep respect......and also joy.
Thank you so much for sharing your thoughts.

I really enjoyed your stream-of-conciousness writing Pete. Beautiful images too. You have made me think about the responses that people would have to the first question, that are probably revealing about that person's experiences and thought-processes and maybe even priorities. I once asked a well-known dotteral expert what was the appeal of birds and he just said 'Flying. We all would love to fly'. For me, many things, but perhaps mostly it's the detail of pattern and colour, and the perfect way that feathers overlap and cover over the shape, varying their size and type just as they are required for the purposes on each part. Thanks for sharing!

RR — thank you, and thank you for your inspiration and encouragement, too :-)

Kate — I'm not surprised you'd notice that kind of complexity and detail. That ability to pay attention, to see things from different perspectives and understand how details interact to become the whole, must be a huge asset for an artist.

Greg — thanks! And I have no intention of stopping, even if the posts are far too sporadic ;-)

Hi Pete, what a lovely, thoughtful post. It is difficult to answer your question! They are wondrous critters without exception, from the red robins that bathe in the water I leave out for them, to the pair of sea eagles that pay no attention to me at all - unless I have my friend's little dog with me. (she looks like a rabbit!)

" You, in turn, only envy them in a good, respectful way, the way you wish you were as wonderful as someone you love."

Birds are a wonderment, ancient lineage of survival gone beautiful.

Heard a birdcall this morning I didn't recognize - no notable there is very little I do. I knew it was lovely and complex rhythmically. I laid there, cat Eleanor on my chest, and we listened.

Thank you Sarah — glad you liked it :-) You have such a wonderful diversity of birds to enjoy over there (not surprising, given songbirds originated in Australia), and although Aotearoa has marvellous birds of its own, I sometimes get a little wistful when I think of the huge diversity of birds I've been lucky to see in other countries. (Keep that little dog close when the eagles are around.)

Zhoen, I'm delighted you noticed that sentence — thank you. Your comment reminds me to listen harder — inevitably, my noticing is dominated by vision — and right now I can hear a bird I don't recognise (sadly, no cat to share the listening with, though). Must go and check it out.