Out at sea the swell reached six metres; the interisland ferries huddled in their harbours, unwilling to brave Cook Strait. From the 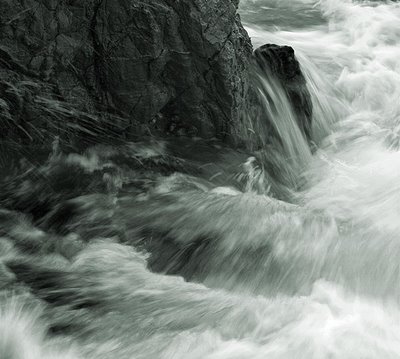 upstairs bedroom I looked out through big French windows, over Eastbourne’s rooftops to the wild, wind-whipped harbour. Ragged waves streamed along the coast, heading tirelessly towards the Petone foreshore; when one finally failed and sank back into the sea another always replaced it, never more than a few seconds behind. The progression seemed eternal—those waves would roll up the harbour as long as the gale continued; if the wind never ceased, the waves would surf on forever, endlessly following each other, never tiring, never feeling any urge to do anything different, never wanting to be anything other than waves. This, I thought, is what it means to be mindless. I reached down and ran my hand once over Ralph’s head. He shivered, wriggled slightly, and curled tighter into his nest in the duvet. Eyes shut, paw over his nose. A sphere is the optimum shape for retaining warmth. Cats know this.

During the night the southerly gale raged; rain continued steadily until the small hours before becoming sporadic; squalls in darkness. The wind persisted, then, at 5:32 a.m. an earthquake jolted the house; hard and swift, as if the world had tried to kick me awake. It succeeded.

By dawn violent gusts had begun to boot the sky to bits, breaking the concrete-coloured layer into rough clouds. 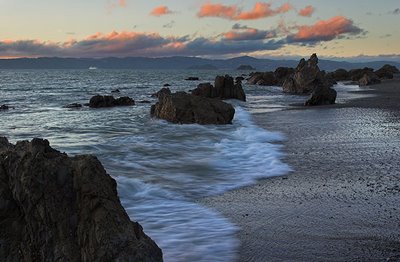 A listless sun mustered enough strength to wash a little colour over the clouds—salmon, mauve, a faint lilac, a muddy, weak yellow-brown, and behind it all the washed-out duck egg blue of clear sky. It didn’t last. The temperature continued to drop—on TV that evening I saw snow closing down the Desert Road—and by late morning the cold showers had returned. Once, I heard a soft rattle on the windows and looked up to see sleet driving in and sliding down the panes. I muffled myself in fleece and thick socks and fingerless gloves; I drank hot cups of tea; Ralph did his best to keep us both warm; but finally I could bear the cold no longer. I lit the fire in the late afternoon and Ralph relinquished my lap for the prime spot where he could toast his fur in the front of the imprisoned flames.

“Where are the eagles and the trumpets?

Buried beneath some snow-deep Alps.” [1]

After the southerly I rode again along the coast, out towards Pencarrow Head. Pedalling hard to heat up, squinting into the late sun, everything salted with the smell of fresh-thrown kelp. Feral goats browsed the gorse hillsides; a pair of oystercatchers 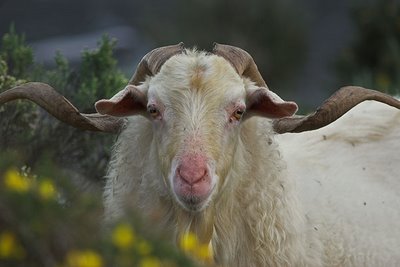 fossicked just out of reach of waves that ran up the beach, stretching towards the wrinkled pink legs then retreating, hissing as they slid back down. The birds made short runs, stopped to look, probed among the stones. Along the shingle beach, blackbacks picked dying mussels from the wrack, lifted them high into the evening and dropped them to break and ooze on wet shingle. I stopped and watched; saw the moment of release—the beak opening, the black silhouette of the shellfish beginning its final arc, the long fall beneath beating wings.

I have never known such speed
mother

nor such solicitous wings
following my fall.” [2]

I watched the conclusion—the big gull, hard-eyed, picking at the limp flesh, shaking it hard to free it from its shell. The transfer of life: mussel becoming gull. Eventually the gull would become something else, perhaps those flies rising in dark clouds from the wrack where a few feathers still clung to desiccated tissue glued to the bones of a wing; perhaps voracious sea lice; perhaps the crabs waiting for high tide and the chance to creep and scuttle sideways and pull and tear, always alert for the shadow overhead. What might remain of the gull might dissolve into the sea, to be filtered by the mussel anchored for a while to ...

The ferries were sailing again. The Arahura slid up the harbour, a deep thrum resonating through the evening like the first hint of an approaching earthquake; 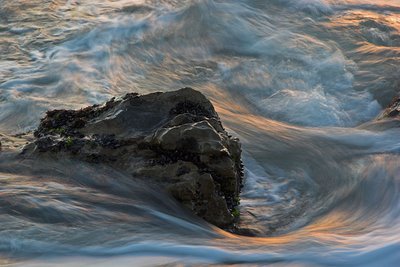 the giant engines of orogeny. By now the world had turned, obscuring the sun; the shadow of the western hills crept up the bluffs and valleys behind me, another kind of encroaching tide. White goats, yellow gorse, ochre slipfaces. In the curve of a sheltered bay, small, widely separated waves flowed in, hardly more than long ripples, drained of physical energy but full of poise; a kind of elegance and grace in the way each ran along the surface of the sea, unbroken except where the near end touched shore and crumpled in a soft collapse of foam that followed the curve of the bay. As each wave passed, the almost iridescent colours of the reflected sky shimmered, heaved, then relaxed, waiting for the next long pulse.

“I think we come here so our words
can fail us, get humbled by the stones, drown,
be lost forever, then come back
as beach glass, polished and anonymous,
knowing everything.” [4]

I biked home into the twilight, into the cold, knowing everything and able to explain nothing. 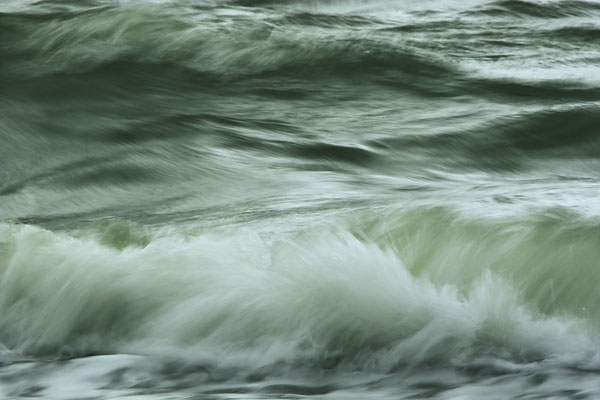 Posted by pohanginapete at 4:10 pm

Wow...such an honour to have joined you on your journey that day, Pete. Such a pleasure also, as always...!

Oh, yes...there is nothing more ALIVE than the Wellington harbour in a storm - envigorating and intimidating all at the same time...awesome! It seems you were privileged to also feel Gaia stretching herself a little - an early morning earthshake (as my daughter used to call them when younger) certainly gets the blood running.

Thank you so much for this - and for the poetry - appropriately and beautifully placed within your words.

Keep warm down there - the felines know how...for sure! x

"drained of physical energy but full of poise"

What a powerful, hopeful phrase. I'll keep these words nearby today as I try to make my way into my thinking.

I have several books by Don McKay, including Camber, a volume of selected poems which contains the one you've quoted.

Thanks Duncan :^) What's the old adage? Something about there being no bad weather, just an inappropriate attitude?

Kiwisoupgirl: I like "earthshake" — nice. Were you in Wellington that day? Or did you mean it figuratively (in which case, thanks!)

Brenda, thanks, and I'm interested you should include "hopeful" in your description of that phrase. The phrase felt right, but I don't believe I was consciously trying to convey anything other than the feeling. Yet, when you say "hopeful", it's as if you've put your finger on something.

Beautiful piece, Pete, and wonderful photo of the water swirling around the rock. I love watching that interaction between waves and rocks, when those hollows and ridges that form as the water swirls by. Your photo captures the dynamics so well.

Thanks Bev. I'm looking forward to getting back there in a couple of weeks' time; biking along the coast again; watching the waves coming in around the rocks and up and along the beach. The movement's entrancing; similar to but different from the way rivers move.

What an AWESOME post, pohanginapete. Wow. I was fully engaged in your ocean by the words. The photos are fantastic, but they do not carry the way language does--the way the poetry you used, does. Thank you for both--for feeding different places in the soul with your collaboration.

Thanks Lené; interesting to hear your thoughts on the words and photos. Each medium has its strengths and constraints, and I hope I never have to choose one over the other.

I've come back a few times to read and re-read this post. There are so many ways here that the earth articulates its passions. Your words and photographs convey so much of it, beautifully and eloquently.

what a gorgeous weaving of image and word - i can nearly smell the ozone tang in the air, blending neatly with the salty seas. you are at home with your images (both written and photographed) and they feel perfect. i especially love the light in the fourth image. it is good to be back in touch and catching up with all that has been written and seen while i was away!

Robin, thankyou: knowing the words have been read repeatedly is one of the greatest compliments for anyone writing. :^D

YSWlf: glad you're back! and I'm grateful for the encouragement. It took a while to learn how to see what the light did with the water; what the water did around the rocks — but that was much of the delight of being there. Paying attention with a purpose, I suppose. (Sorry I can't comment on your blog — it keeps telling me I'm spam...)

thanks for the don mckay link. finger pointing at the moon - a remarkable piece of writing. superb. reminded me of a phrase from neruda 'university of the waves'. your posts are always full to bursting pete. also remarkable. (o)

After reading this and the latest post consecutively, I am drawn to how the natural world provides you with intimations of oblivion—in the previous one it is death, in this one mindlessness. The mindlessness is wonderfully expressed!--“This, I thought, is what it means to be mindless. I reached down and ran my hand once over Ralph’s head”—I love the impossibility of the first sentence (how can we think about mindlessness? Or, even worse, how can we write and be mindless?) BUT THEN, you reach down to the pure sensation of Ralph’s head. Maybe pure sensation is the closest we humans can get to mindlessness before death??? Still trying to figure out the latest intellectual exercise…

Wonderful Oceanscapes. Here I am finally thawing out, and looking forward to summer, and you make me yearn for winter storms and a cosy blanket, with a curled cat.

Debbie: I wonder, is mindlessness closer to death or life? But that sets up a dualism; a construct of the mind, an intellectual exercise. In fact, I have some difficulty using the word "mindless", because it has pejorative connotations which can antagonise my intended meaning of the word. To me, "mindlessness" also (perhaps even primarily?) has the sense of being caught up in "being" — closely akin to your "pure sensation" (hence the closeness to life, cf death). I think it is, or is related to, what buddhists refer to as "no mind". But I'm out of my depth now... Thanks for those thoughts, Debbie.

Zhoen: If we have much more of this weather, I'll be yearning to thaw out! But I'll always yearn for cats.

Water dances, those photographs. Browsing and reading through your posts I was stopped by the green water. Quickly caught my breath at the wonder of them. How did you ever stop the water so that you can still feel its motion? It's like looking at a movie, or a window on the ocean. Just pure movement in a dreamlike blur of colour. And for me, pure love.

no: Watching waves, the way they break and curl, the sound of them... sometimes it's simply beautiful, sometimes a little frightening, always entrancing. A bit like love in those respects, too. Glad the photos moved you. :^)