Most of the shops I’d wanted to visit in Wellington were closed. Well, two—Unity Books and Bivouac. Perhaps it was a good thing. I checked a few music stores, in all of which I failed to find Talking Timbuktu (and would probably have been unable to afford it anyway); I browsed Dymocks, 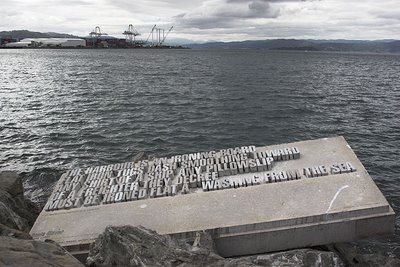 unsure of which books I wanted to investigate; and I wandered into Mountain Designs to stare pointlessly at the shoes, thinking of the disintegrating Garmonts which had begun to cut into my heels. Faced with a wall arrayed with expensive footwear—all, I assume, made in China or a similar cheap-labour country at the cost of a few dollars and who knows how many workers’ health—I realised I don’t actually need most of the things I was ostensibly shopping for. Unmotivated and uninspired, I walked out and made my way towards Te Papa, the Museum of New Zealand.

I wasn’t sure why my feet took me there, not sure what I wanted to look at. Out of habit I walked up the stairs, across the foyer, into the Awesome Forces hall, and on towards the natural history exhibits. Someone with a little digicam was photographing the great, upraised foot of the enormous moa; above him, poised at the moment of impact, a huge Harpagornis stretched talons down to strike the moa. Nearby, a set of scales balanced three mice against a giant Deinacrida—3 blind mice, the equivalent of a dry weta. At the far end of the glass case I found reconstructions of two extinct birds: the long-billed wren (Dendroscansor decurvirostris) and the Stephens Island wren (Traversia lyalli). I crouched beside the case, reading the text. I’d thought the Stephens Island wren had been known from only a few specimens (that terrible word) brought in by the lighthouse keeper’s cat. Not so, apparently. According to the text, in 1894, Walter Buller looked at what the cat brought in and declared it a new species. Within two months, 15 specimens had been caught and sold to collectors.

In the adjacent Mountains to Sea exhibition, a display showed some of the fauna and flora of the Southern Alps. A kea called from above and I recalled the last time I’d heard that sound, just a month ago above Lake Adelaide in the Darrans.

Then I found the rock wrens; male and female. Old and faded, their colours almost gone. Very still. Silent. They refused to look at me—so unlike the attentive, interested little lives I’d met at Sefton Biv, above Lake Adelaide, at Phil’s Biv, and on the yak pastures below Sabre. I moved around, but the female maintained a slightly downwards gaze, as if trying to remember something from long ago. I looked at her for a while, then left the building, walked out into the open where gulls flew and argued along the waterfront, where sparrows fossicked in the tussocks and shrubbery of a rock garden, and a pair of mallards swam out of the darkness into rippling light. I felt as if I’d been kicked in the chest.

What does it matter—what we do with things after they die?

(Click on the photos to get a larger image)

Notes:
1. Other accounts of the Stephens Island wren’s extinction exist. Perhaps the best researched is that of Galbreath & Brown (2004); the authors concluded that 14–17 birds were collected from 1894 until possibly as late as 1899, not all by the same cat. The outcome, of course, was the same. [Galbreath, R.; Brown, D. 2004. The tale of the lighthouse-keeper's cat: Discovery and extinction of the Stephens Island wren (Traversia lyalli). Notornis 51(4): 193-200. (Abstract)]

Photo 1: Detail from the Wellington waterfront: an extract from Denis Glover’s Wellington Harbour is a Laundry. Extracts from other poems, by other poets, have been incorporated into the waterfront’s architecture in ways like this. Poem as sculpture; words made concrete.
Photo 2: Dawn over Wellington Harbour, from where I was house sitting last weekend, high on the hills above Eastbourne. Central Wellington directly below the moon.

Posted by pohanginapete at 4:41 pm

Pete: Thanks for commenting at my place because it's enabled me to find yours and I'll be back.

And this post packs a punch. Chilling - and your last sentence says it all.

Initially I read the Glover poem and walked on. I hadn't gone far before it pulled me back and made me take out the camera.

Those are good questions you posed in your post about moving. Incidentally, I'm sure you'll love Hereford. I have wonderful relatives in Great Malvern, not far from there.

I had never read Glover's poem. The imagery is wonderful: ironing board harbours/iron tugs/shirts of the sea/pillowslips of freighters....how can one possibly look at these vessels now without remembering Glover's delicious imagination. Thankyou.

It's difficult to match the power of your photographs--but somehow your words manage to do so.

I'm grateful to have found you.

Adagio: Like most NZers, I've known some of Glover's poems all my life (or so it seems). It's wonderful to see his words there, where so many people can encounter them — people who might otherwise never have found him. Thanks!

Patry: Welcome, and thanks for that generous comment. :^D

Hi again Pete. Just briefly to thank you for your kind welcome and for posting the link. And also for the introduction to Denis Glover which I've just followed up .. haven't met him or his work before - will investigate. Thanks.

I've been hearing Ali Farka Toure recently on two local (Seattle area) public radio stations which have what they call "world music" times. Did Toure die recently? Don't know why that sticks in my mind.
A book group friend from NZ sent me a toy weta. I think they look wonderful, but she told me I might think differently if one crawled across my counterpane first thing in the morning!
Eh. They sound harmless, like the fantastic Goliath bird spiders in Brazil, which, of course, are being slaughtered by the thousands for the tourist trade...
We are probably going to be the last to see any natural marvels. I feel deeply sorrowful for our children.
Thanks for more excellent photos and reflections.

Pete-- This post made me think of your previous post about traveling, home, and death. When we look at those spiritless creatures in museums, their stillness is a mockery of their personal life forces. They are set in poses meant to please, but the poor animals are just frozen in some space and time, never permitted to become finally an appropriate dust. For the poor rock wrens, they live in the zoo of the homeless dead.

What does it matter-- what we do with things after they die? I've been trying to come up with an answer to this question. For me, it has something to do with recognizing the animating life force before the final breath, and respecting the corresponding spirit after.

Mary: Glover was a real character. Perhaps his best-known poem is "The Magpies" — say "quardle oodle ardle wardle doodle" to any New Zealander and they'll instantly understand you.

Isabelita: Yes, Ali Farka Toure died just recently. Abdul-Walid has a guest post about him on via Negativa. It’s a beautiful tribute with a marvellous accompanying photo.
Unlike many people, I love weta. Just recently it's been discovered that they have a particularly important role as dispersers of some larger seeds of our native plants. I think weta will be around for a while yet, and I certainly hope you're wrong about our legacy.

RD: Yes. Recognition and respect. To ignore those responsibilities because you consider life as purely mechanistic seems to me to be enormously destructive, not just for what's being considered, but also (perhaps especially) for who's doing the considering. And recognising and respecting life and the significance of death doesn't seem to me to be in any way incompatible with an "enlightened" (western scientific) worldview.

Hello, Pete. I found your blog through Adagio at Doubt Everything. I've only poked around a very small bit, but am thoroughly blown away. It is a wonderful read and the photos are stunning. As a bit of a wanna-be Kiwi (and that might be underrepresenting the facts...)the photos make me long to be back in New Zealand even more. Anyway, I'm glad I found your blog, and look forward to reading more. Cheers!

Thanks Lulu. Glad to share this part of the world with you.
:^D

A good post all around. I'm fascinated by the first photo - not exactly what the Brazilian modernists had in mind when they invented concrete poetry!

Okay. I just had to look up the term 'fossicked'. Apparently, it's also what I do for a living - who knew!!
Beautiful image of the female wren ... so true and imagined. Wonderful!

Nice one, Dave! Thanks.

Trix: Thanks :^D "Fossick" is one of those words that to me sounds old and interesting...

'Talking Timbukto' is a marvelous CD. I've been listening recently much to the Ali Farka Toure and Toumani Diabate 'In the Heart of the Moon,' which has the same tonality--it's wonderful music.

Hi Larry. Your comment bears out what I'd heard elsewhere. Now I just have to hear it for myself! Not much doubt, though: knowing "Niafunke", and Ry Cooder's collaboration with V.M. Bhatt on "A Meeting by a River", I'm looking forward to listening to "Talking Timbuktu". Will look for "Heart of the Moon" too. Better start saving now...

Thanks for the recommendations. Appreciated.

Rexroth's Daughter sent me here, because I had emailed her about my day yesterday. I went with a friend to Harvard University's Museum of Natural History and had gone, with reluctance, into the section with stuffed animals. In my email, I had even put the word "specimen" in quotes because I was so uncomfortable with it!

What I hadn't mentioned to RD was that just as we were entering the exhibit, a woman was escorted out by two friends. The woman was crying, almost hysterical, because of something she had seen. we couldn't catch what it was, but there's enough death there to break any feeling heart. My money, though, is on the part of the exhibit where there are chopped-off hands of a couple of great apes, presumably for comparison. I couldn't bring myself close enough to look.

Many of the animals have been there so long, that they are coming apart and you can see the stuffing inside. I was told that the museum is not going to replace them just to have a "fresher" corpse on display. I hope not. As I wound my way through the exhibit, I fantasized a time when the animals would be released and returned to the earth so they could continue their journey of change.

Your photos are beautiful. You are so lucky to live in New Zealand! I've always wanted to visit there.

Aargh, to see something like the hacked off hands of apes... don't want to visualise it. At least with mounted animals there's usually some attempt to present them in some semblance of lifelike attitudes; not much comfort, but compared to chopped hands... Fortunately that's unacceptable throughout much of the world now. I suppose we have to recognise that much of that "collecting" was done when times were very different.

Yes, I am lucky to live here. I don't take it for granted, either.