Life on the rocks

Three weeks on—and off—the road. Sometimes almost as far off the road as you can get in Aotearoa (well, maybe not, but it feels like it after you’ve walked for 9 ½ hours over hard country, carrying a third of your bodyweight). 3852 km of driving. Mountain summits to coastlines—on both sides and as far South as you can go in the South Island. A mountain of photos to work through, impressions to reflect on, words to muster. How do I show you what it was like?

Inadequately; but I’ll try. This is Part One, of an indeterminate and nonchronological series [click on the photos for a larger view] .

It’s Aotearoa’s second smallest bird—only the rifleman (Acanthisitta chloris) is smaller. Once, it shared the country with five or six cousins; now, only these two tiny species remain, the last of New Zealand’s Acanthisittidae. 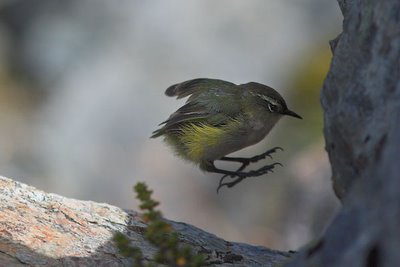 Once, it lived in the North Island too; now it’s confined to the South Island and is believed to be declining. You won’t find it anywhere below the bushline—it lives only in alpine environments, all year round. It’s piwauwau, the rock wren, Xenicus gilviventris. The IUCN’s fact sheet refers to it as the South Island wren, as “rock wren” is used for another species, which, however, doesn’t occur in New Zealand. For years, I’d wanted to see these birds; a year ago I thought I’d have a good chance while climbing with Terry and Lance at the head of the White River, but it wasn’t to be. After that trip, Terry carried on South and saw them while crossing Ball Pass in Aoraki/Mt Cook National Park. Back at Pohangina, I waited, sure my time would come. Then, at Arthurs Pass a few weeks ago I thought my chances might be good, but in five days there we saw no wrens. With the weather deteriorating, we returned to Christchurch, then drove South to Aoraki.

We’ve done the steep bit, the climb from Stocking Stream to the ridge just below Sefton Biv. Only five or ten minutes to go, a short distance over massive blocks of angular rock, hopping and balancing, picking a line through the maze. Sensing movement, I look up and find myself gazing at him only a few metres away. A male rock wren. He gazes back, bobs up and down and scampers off a short distance before stopping, bobbing, and looking at me again. I slip my pack off carefully and extract the camera; fit the big lens. He watches, as if waiting to oblige me.

I follow him for a while, gradually trying for better photos but aways enjoying the closeup view, the details of his feathers, the way he does that characteristic knees-bend, bobbing up and down on the spot. What purpose does it serve? There’s no sign of the female (I find her later), and communication seems to be achieved by the high-pitched, repeated call. Perhaps the bobbing helps him judge distance, the slight shift in angle enough to help him assess how far he has to hop/jump/flit to the next block in the piled-up jumble? It seems implausible, but it’s all I can think of—assuming, as is the wont of scientists, that it must have a purpose. But I’m not consumed by the question. Instead, I’m captivated by this little wisp of feathers—that’s how he seems to me. I can almost feel how little he weighs; if he sat in my palm or perched on my finger I’m sure I’d feel nothing but the tickle of tiny claws; it’d be like trying to feel the weight of an illusion. Yet he survives the winter up here, under the snow, 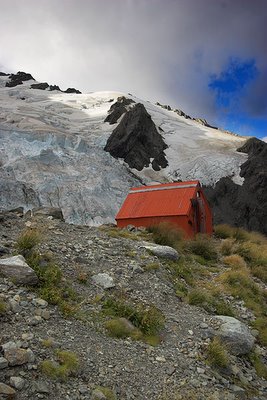 in the crevices in this rock field. The incongruity of it—that this insubstantial, warm life makes its home in this hard harsh world; the biting cold; the snow, hail, and slashing rain; the long, freezing darkness—astounds me.

At the bivvy we bask in the sun and my sweat-saturated top, draped over a rock, quickly dries warm and fluffy in the wind and intense light. Cloud slowly thickens towards evening and hogsbacks begin to form, suggesting tomorrow might not be so fine. Every few minutes, something collapses in one of the many nearby icefalls—sometimes it’s just a serac tilting, sometimes it’s a tremendous boom and long roar as something calves and disintegrates down Sefton’s eastern face. Beside and above us, the Te Waewae glacier clings to the steep mountainside. High up, it’s very broken apart but still beautiful—long, sweeping curves and perfect, sharp arcs where the textured snow splits to reveal deep, gaping crevasses—but further down, closer to our level, it’s chaotic, ugly, shattered, riven: impressive but fearsome; a place no sane person would enter. Here, we’re on a promontory where nothing can fall on us. Rock and herb field; snowgrasses; gentians; many other tough and lovely plants, all flowering or seeding. The six o’clock sun begins to accentuate features, like the edge of light where ribs of rock fall against a background of dark gullies, or the olive-green and dull yellow snowgrasses illuminated against the far below, far distant, cloudshadowed Hooker Valley. Through binoculars, we can see people at Mueller hut and I’m glad I’m here, just Jonathan and me and the wrens and an occasional alpine weta, not there with the crowds paying $35 a night and looking through binoculars at the two tiny figures enjoying the evening at Sefton Biv.

Morning, and a rainbow arcs across the face of Sefton. Hazy sunlight filters in long shafts down the dark sides of the Mt Cook Range, directly opposite us across the deep space of the Hooker Valley. Southwards, the Mueller looks grim and remote, but high above on the flanks of Sealy and Annette, 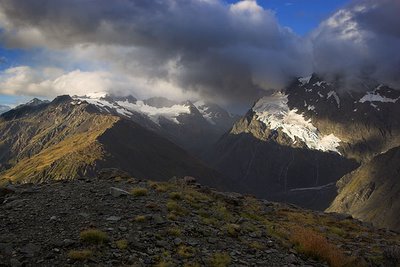 sunlight finds blue-white glaciers and névés. They gleam, brilliant, vibrant, in the early sun. We’re on the edge of the rain. In front of the biv, if you don’t go too far, you’re sheltered from it; step out to the side and you’re spattered with wind-blown drops. I light the MSR and begin heating water for a brew. Here, life reduces to simple decisions: when to eat, which route to take, whether to continue or turn back. Sometimes these seem trivial; sometimes your life depends on your decision—but even then, it’s not complicated, because your goals are few, clear, and immediate. This is life pared down; this is the essence of life. I guess it’s how wrens live.

Photo 1: This isn't technically the best photo, but to me it best reflects the character of the wee guy. I managed to rescue the image with some rough and quick post-processing (a modicum of contrast tweaking and sharpening, if you need to know).
Photo 2: If there ever was a room with a view, Sefton Biv is it. It sleeps four people comfortably and you can stand upright in the middle.
Photo 3: Across to and up the Mueller, early morning.

Photos and words © 2006 Pete McGregor
Posted by pohanginapete at 8:20 am

And about time too! Here's me been fruitlessly checking your blog every day while you've been off enjoying yourself. The wren photo is a ripper, ( the others too of course) looking forward to reading the next installments.

What an experience this must have been! Thank you for sharing it :-)

Wonderful photo of the wren!

Thanks! Duncan: yeah, sorry, it's hard work enjoying life this much, but someone has to do it ;^). I have every intention of rewarding your loyal blog-checking more often! Anita: Yes, certainly a brilliant time, and that's only a little of it. I'll be working on writing up more this week, and I'm really encouraged to know people like you enjoy hearing about it. And Pamela, these wrens are something special, and this photo helps me remember how they're so light and fragile, yet bold and confident: they seem so at home in a world that contrasts so much with their own nature.

Thankyou Tracy :^) Sharing the delights adds a great deal to the enjoyment.

Ah! Welcome back, Pete, your insights and artistry have been missed. These photos, especially that wren, were so worth wait. Looking forward to your further sharing of the adventure.

Yes, RD, a great trip but it meant I was out of the loop for a few weeks. It's a good feeling to be able to catch up with friends :^)

What a beautiful account. And the wren is absolutely adorable!

Yes, they have wonderful personalities. It'd be a hard person who didn't feel an immediate affection for them. Thanks Brenda.

Welcome back Pete! Guess I will see you soon at the Winchesters.

Yes, looking forward to catching up with you at the "Winchester"/Celtic sometime this week, Arne. Hope there won't be too many zombies there ;^)

I like this entry. Rock wrens seem intaresting. So you say rock wrens are the second smallest birds in Aotearoa, but do you know that the smallest bird in the world is the bumblebee hummingbird? theyre about 2-3 cm long. Anyways, I liked your entry. I really liked your photos. I'm actually thinking of getting some new film for my camera and take some spring pictures in spring. Right now it's still winter. HArsh, white winter. Your so lucky you have a hot sun and a warm wind blessing you while us Canadians have to freeze in the white devil flakes upon the ground and trees. Gorgeous, but evil. -Sara

Ah, hummingbirds... I've never seen them, Sara, but know enough about them to know I'm looking forward to the day I do get to see one. Something so tiny, yet so brilliant and so full of life. A bird 2–3 cm long is hard for me to imagine: even our smallest is more than 2–3 times that (I'll include a photo of a rifleman in the next post, very soon).

Meanwhile, enjoy that evil weather and don't wait until spring to get out there with the camera, seeing things. Nice to hear from you, Sara.